Have you come across acronyms and got confused about what they mean. Wait! Do you know what these abbreviations mean?

If No, then you’re facing the problem exactly what I faced!

In any case, you are missing on many acronyms. No worries, Acrons is here for you.

The terms above are some of the commonly used acronyms these days. People use it all the time, whether on Instagram, Facebook or Twitter. I used to search about them almost every time except the ones I was aware of (like ASAP).

This grew even more, when I found that at workplaces these acronyms are very common. Terms like CMIIW, AFK, RFC and what not 😱

I researched a bit about this. Reached out to few of my friends and colleagues.

Guess what, almost 70% folks were not able to answer all 😅 Well, I knew it’s not only me, but many people are facing this.

Well, now that I got a problem, why not build something to solve this 😈

I had been exploring Vuejs for sometime now and was thinking to building something cool and useful. Well, I got the opportunity! Time to build ✅

Well, finding data was one of the problems. Since, I wanted to make a dataset of such acronyms. I searched, found some, but that wasn’t all useful.

I wrote some short scripts quickly to convert some of the data from the articles I found. About in an hour. I had this JSON file with around 60 acronyms.

I simply love Vuejs. I bet you’ll fall in love with you once you start exploring it.

In case, you don’t have NPM, follow instructions here.

You can choose custom setup or go with the default Babel/Eslint one. If you want to use webpack or others, check here.

Now, I just had to show this JSON on the screen somehow.

I decided to build a simple table view which would be divided into two components popular and filtered lists. Now, Just looping through the data component lists and bang!

Below is the code for adding acronyms in popular data list!

But, scrolling through 60 items would be a pain. I found it annoying. Search feature was the solution. I wrote a simple function which returned filtered list of acronyms if the searched characters are present in the acronyms.

Here is the JS function -

I had to put this as computed property since it had to call this function on every search character and update component with new list. Learn more about computed properties here

Finally, since everything was working well now. I tweaked the UI a bit to make it usable 😛 I was happy with this result after sometime. LMK how it looks 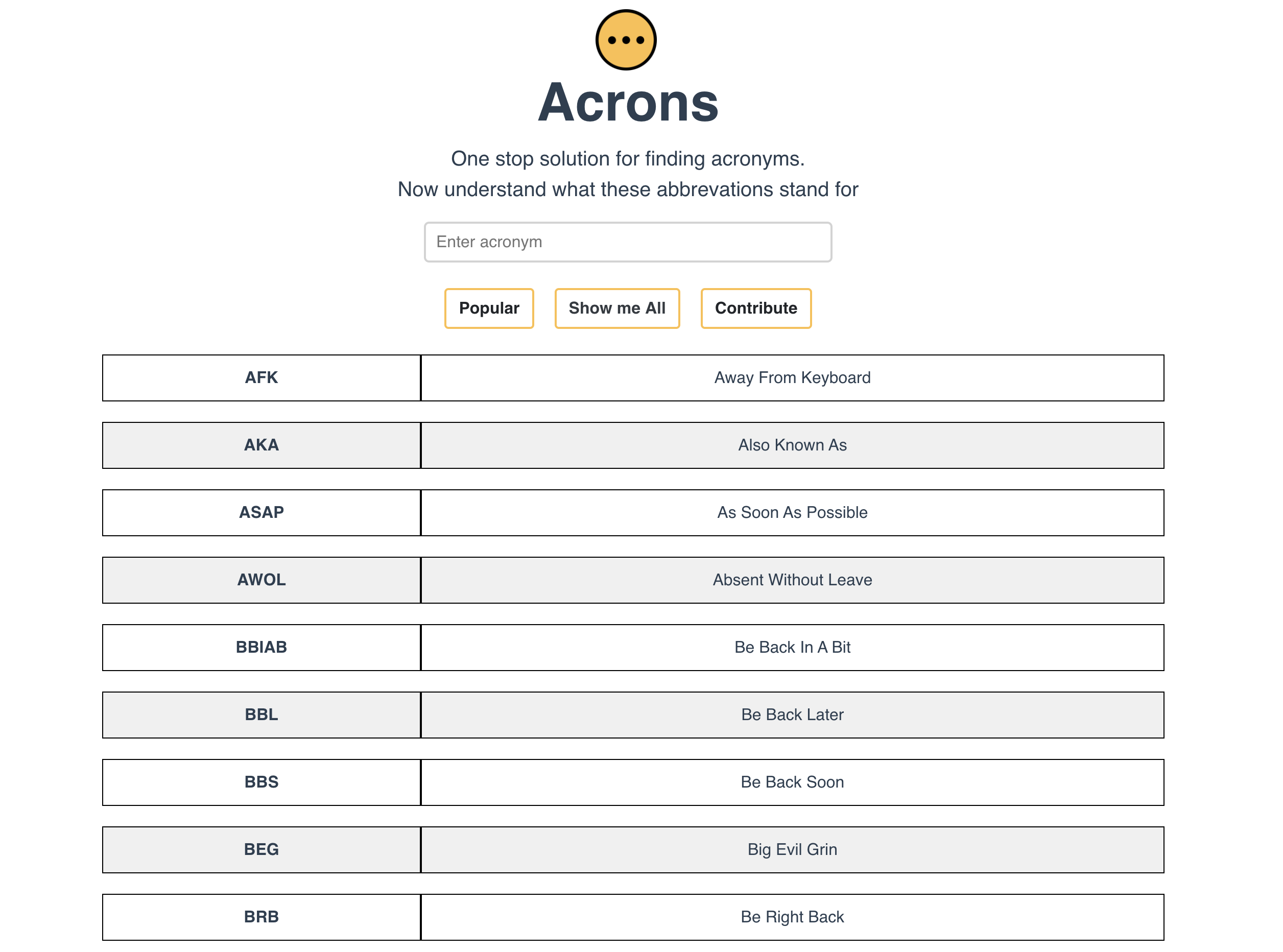 Acrons is Open-source ❤️️ Do suggest and add acronyms you use daily. Find acrons on Github.

Do upvote it on Product hunt 😁

I hope you learned something interesting and new. Don’t miss out on latest blogs - Subscribe now.

Reach out to me at mohitkhare.me